After spending three days on the Disney Wonder and taking in breathtaking scenery of the Vancouver coastline and Alaska, I decided to stop calling my vacation a cruise. It was obvious that this was an adventure. Adventure was now taking me to the northernmost point of the Inside Passage: Skagway, Alaska.

Join me as I travel by train through the mountains of Skagway on the White Pass & Yukon Railway.

I have always enjoyed traveling by train, and I was very excited about boarding the White Pass Scenic Railway to experience Skagway from an elevation that would eventually reach 2885 feet. 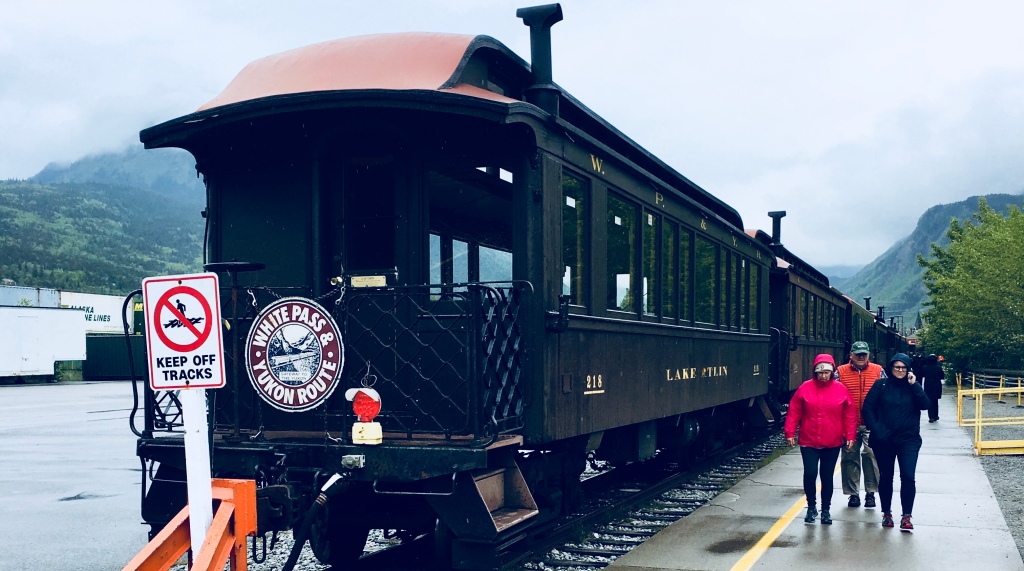 Our train began its journey at sea level. We slowly pulled away from the station, and could hear our host recall the history of the White Pass & Yukon Route over the loudspeakers. I listened intently to the tales of men who took the perilous journey into the mountains in search of gold during the Klondike Gold Rush. As our train crept past the trails they climbed, I could almost see their faces, determined to find their fortunes in gold. You can blame my writers mind for my active imagination.

About 10 minutes into our journey, an announcement was made:

“Ladies and gentlemen, at this point of our train ride, you are free to step outside and onto the train platforms at the front and back of each passenger coach.”

Up to this point, we had been seated inside the train, admiring the views from the large windows. As soon as the safety tips were given, I was the first person in my coach to step outside and onto the train platform. Between the rain and the ‘clickety-clack’ of the train on the rails, I was in heaven! 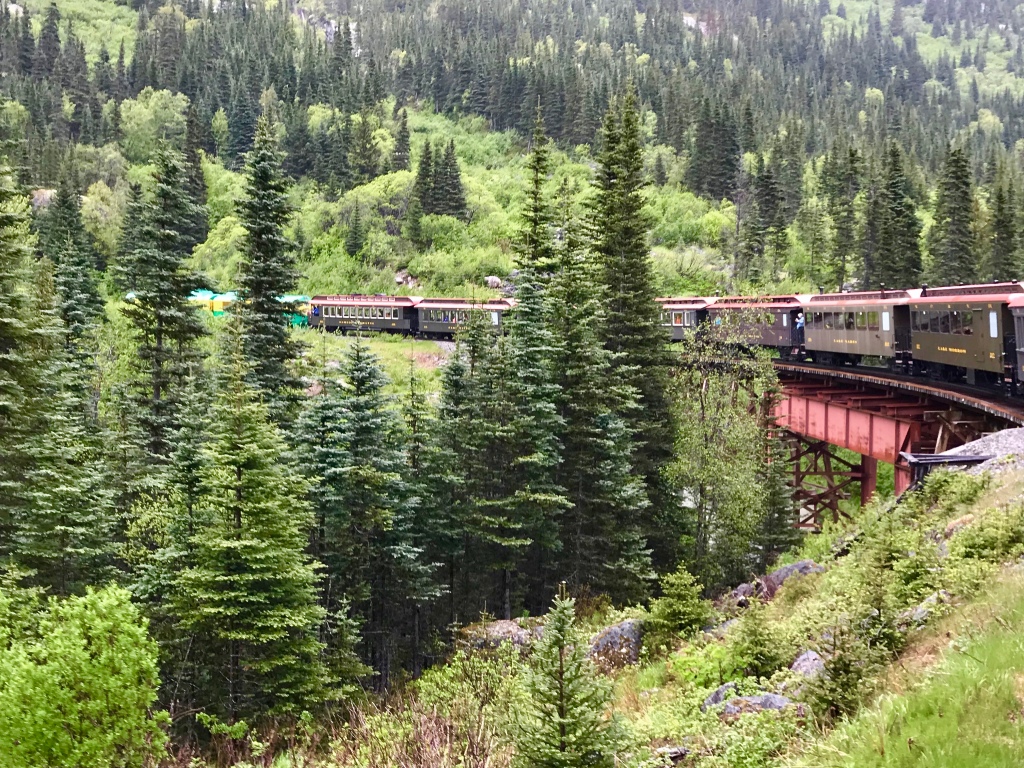 The train continued its ascent, and when we reached White Pass Summit we were at an elevation of 2,885 feet. White Pass Summit is located at the U.S./Canadian border, and it was really neat to cross into British Columbia, if even for a moment. There is no need for a passport because all passengers remain on the train while the motor coach switches over for the return trip to Skagway.

At this point, we were also given instructions on how to flip the seats to face the other direction and every passenger switched to the opposite side of the coach to catch the views they missed on the train ride up to White Pass Summit.

I went back out onto the train platform and recorded one of the most scenic views of our journey back to Skagway.

The Wonder was docked within eyesight of the train depot, and we headed back to the ship, chattering about our experience the entire way. Once we cleared the gangway, we gratefully accepted the snack of hot chocolate and chocolate chip cookies from a table set up on the deck. (Didn’t I say that Disney thinks of everything?)

Once I was back on board the Wonder and had the remainder of the afternoon to myself, it suddenly dawned on me that, because of the experiences I had through traveling, the person I had become was no longer content to sit inside and see the world through a window. Whether or not anyone else left their seat to see Skagway from the train platform, I was going out there!

It is an exhilarating feeling to be free from fear and the opinions of others.

“Fear of man will prove to be a snare, but whoever trusts in the Lord is kept safe.” Proverbs 29:25

Has there ever been a time when you let fear hold you back from starting something new or making a change in your life? In my past, I have allowed fear to take control. When I realized that I was not a tree, fear became powerless. If travel has taught me anything, it’s that the world looks better, brighter and bolder from the train platform.

Leisure is often viewed as moments of doing nothing. What I have found is that leisure means doing something that brings you joy. Leisure is an active word. I want to encourage you to create leisure time in your life that will activate feelings of joy and fulfillment. View all posts by leisurelambie

6 thoughts on “The Wonder of Alaska: Part 2”

This site uses Akismet to reduce spam. Learn how your comment data is processed.